The book “High Density Data Storage: Principle, Technology, and Materials”, edited by Yanlin Song and Daoben Zhu from the Chinese Academy of Sciences, is a comprehensive and well illustrated review of the current state of the art in information storage; it also includes descriptions of the potential next-generation technologies. The chapters cover four main fields of data storage ranging from methods familiar to the general public such as magnetic recording for hard disk drives (HDDs) and optical data storage for CDs and DVDs, to less commonplace techniques employing electroactive materials or nanoscale data storage.

The chapter on magnetic media begins by introducing the fundamental properties of magnetic materials. It is essential to understand these properties as they define the ease of writing and stability of these materials. The first chapter explains the fundamentals and sets the scene for the technological sections which follow.

The book was written during 2008, and the first chapter contains a section on longitudinal magnetic recording (LMR) based on platinum and ruthenium technology, which was the incumbent technology at the time. It is still manufactured for a small number of legacy applications. This section discusses the areal density limitations which were rapidly being approached at that time and which led to a requirement for alternative technologies to be introduced. The move to perpendicular magnetic recording (PMR) by the HDD industry during 2008 was the means for them to increase areal densities and realise continually increasing storage density targets. In LMR the data bits are oriented horizontally, parallel to the surface of the disk; in contrast PMR data bits are aligned vertically, perpendicular to the disk. This orientation allows the use of smaller crystalline grains that remain stable at room temperature, resulting in smaller physical bits and an increase in areal density (see Figure 1). PMR media are covered in some detail in the first chapter of the book, including their complex layered structure of platinum alloys and the soft underlayer containing ruthenium. The platinum alloys typically contain chromium, cobalt or iron.

Schematic diagrams representing: (a) longitudinal and (b) perpendicular magnetic media. Reproduced with kind permission from Springer Science and Business Media (1) 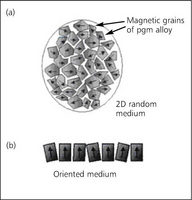 Looking to the future, the rest of the chapter reviews four alternative designs intended to enable the next increases in areal density, all based on existing materials. Of the four alternative designs presented, patterned media is perhaps the closest to market. Based on similar pgm-containing alloys to PMR, patterned media add a degree of physical spacing between bits, enabling the use of smaller bits, and therefore further increasing areal density. The novel fabrication methods required to produce patterned media are taken from the semiconductor industry, and are discussed alongside the magnetic properties of the materials and the new read/write methods that will be needed for this technology to succeed.

Eventually the fabrication methods used to manufacture conventional style magnetic media are expected to struggle with the continual decreases in physical spacing between data-storing bits. This is the point at which the other three technologies discussed in the chapter are expected to offer advantages: these are nanoscale magnetic particles, organic molecular magnets and single molecule magnets. All three of these technologies offer the ability to record data on the nano- or atomic scale, although only nanoscale magnetic particles are likely to use pgms. Further research and development will be needed in all of these technology areas, to overcome stability issues and enable the technologies to reach commercialisation.

Other Approaches to Data Storage

The chapter on optical storage begins with a history of the field discussing the familiar technologies of CDs, DVDs and the advances made in rewritable formats. The materials for future advances in optical data storage, including organic, biological and polymeric materials, are all still in the development phase and it is likely that new methods of reading and writing will need to be developed in order to utilise these materials. Techniques that may offer a solution to overcoming the diffraction limit are also reviewed; these include the use of lenses (Figure 2) and more complex techniques such as scanning near-field optical microscopy (SNOM or NSOM). The final part of this chapter reviews the use of holographic materials to enable data recording in the third dimension.

The use of lenses to beat the diffraction limit. Reproduced with kind permission from Springer Science and Business Media (2) 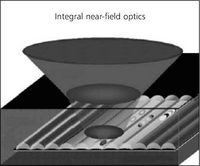 Chapters 3 and 4 address technologies which are at earlier stages in their development and offer potential for the future. A number of high density electroactive and nanoscale data storage methods are introduced, including thin film single-component organic materials developed by the authors. Rotaxanes, catenanes and carbon nanotubes are all reviewed as potential electrical storage methods. On the subject of nanomaterials, the fabrication and operating methods are less well defined, but the authors review current research in the fields of molecular and bioelectronics. Problems associated with manufacture, and improving the performance and stability of both electroactive and nanoscale storage materials are identified as key obstacles to be overcome before we see these devices in products of the future.

Finally the reader is left with the question of what will supersede these technologies once they have been exploited to their full potential. Using currently undiscovered materials and combinations of the methods discussed in the review, the authors offer a suggestion straight out of science fiction: that semi-intelligent, human brain-like systems could one day be developed! Although, considering that automatic doors, laptop computers and cloning were at one time all considered science fiction, who knows what might be possible in the future? In the meantime, pgm-based technology is likely to be dominant for the coming few years, as long as we continue to use magnetism as the storage method of choice. 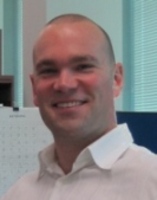 Dr Dan Carter graduated with an MChem (Hons) from the University of Wales, Swansea, UK, and a PhD in Inorganic Chemistry from the University of Nottingham, UK. He joined Johnson Matthey in 2003 and spent three years as a Development Chemist, designing catalysts for the petrochemicals industry. In 2006 he transferred to Precious Metals Marketing and is currently Senior Analyst in the Market Research team, focusing on the automotive, electronics and fuel cell sectors.