In South Africa, a mixture of safety issues, shaft closures and industrial unrest led to a reduction in tonnes of ore milled by the industry. However, the sale of additional platinum from refined stocks means that South African supplies were anticipated to rise by 210,000 oz in 2009 to 4.73 million oz. Platinum supplies from North America were set to fall to 255,000 oz following the shutdown of North American Palladium's mine and the accelerated closure of a number of nickel mines. From Russia, supplies were expected to fall to 745,000 oz, although supplies from Zimbabwe and elsewhere would climb.

Gross autocatalyst platinum demand was forecast to decline by 33.0 per cent to roughly 2.48 million oz in 2009. European autocatalyst demand for platinum was expected to fall by 45.7 per cent, or 900,000 oz, to 1.07 million oz, partly due to an anticipated fall in European light‐duty vehicle sales in 2009. In addition, platinum demand was affected by the declining market share for diesel vehicles in Europe, as fleet sales were depressed and incentive schemes such as the German government's scrappage scheme saw individual consumers buying smaller and cheaper models, which are typically fuelled by gasoline rather than diesel. There has also been an increase in the use of palladium alongside platinum in diesel oxidation catalyst (DOC) and diesel particulate filter (DPF) formulations in Europe, further eroding demand for platinum. Chinese platinum autocatalyst demand however was expected to rise due to a strong performance by the automotive sector there.

Industrial demand for platinum was forecast to drop by 31.5 per cent to 1.16 million oz in 2009. Falling commodity prices and lower capital investment meant a fall in platinum demand from sectors such as nitric acid production, process catalysts, petroleum refining and the glass industry. The chemical industry was expected to purchase 355,000 oz of platinum in 2009, 45,000 oz less than in 2008. Meanwhile demand for platinum from the glass industry was set to fall dramatically from 320,000 oz in 2008 to 35,000 oz in 2009. In the electrical sector, platinum demand was forecast to fall from 225,000 oz to 175,000 oz, following weak sales of electronic devices together with destocking of materials and components during early 2009. However, demand in this and many of the other industrial sectors improved throughout the year, and was forecast to be stronger in the second half of 2009 than in the first six months.

Demand for platinum from the Chinese jewellery sector was forecast to rise by 900,000 oz to a record 1.75 million oz in 2009, as the industry replenished and further built its stocks while the price was low, particularly in the first half of the year. Net Japanese jewellery industry demand for platinum rose as the fall in the platinum price depressed recycling volumes from second hand jewellery. Demand from European and US jewellers declined due to the impact of the recession on consumer sales. Still, global net platinum demand for jewellery was forecast to rise by almost 80 per cent to a net 2.45 million oz in 2009. The lower price of platinum was also expected to boost physical investment demand to 630,000 oz.

Although the total weight of platinum group metals used in the autocatalyst sector was expected to fall in 2009, palladium demand would be supported by a short term increase in the share of the gasoline engine within the European automotive market, and by increased Chinese vehicle production 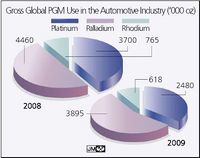 Supplies of Palladium Expected to Decline

Gross palladium demand for use in catalytic converters was expected to decrease by 12.7 per cent to 3.90 million oz in 2009. Demand in Japan, North America and the Rest of the World region was forecast to fall, in line with lower light‐duty vehicle production. Strong growth in domestic vehicle sales looked likely to boost Chinese demand by 135,000 oz in 2009. European demand was forecast to fall only marginally as palladium benefitted from a short term rise in the share of the gasoline engine within the European market, and the introduction of palladium alongside platinum in diesel exhaust aftertreatment.

Net demand for palladium from the dental sector was forecast to fall by 3.2 per cent to 605,000 oz in 2009 despite some support from a high gold price and lower recycling rates in the industry. In Japan, net palladium usage in the dental sector was expected to slip by 5000 oz to 270,000 oz. North American dental demand for palladium was also forecast to fall to 255,000 oz. The electronics industry was expected to purchase a net one million oz of palladium in 2009, a 100,000 oz fall from the previous year as the slowdown in the world's economy hit consumer sales and industry stock levels. The chemical sector was expected to purchase a net 345,000 oz of palladium this year, little different to the 355,000 oz bought during 2008.

Net jewellery sector demand for palladium was expected to increase in every region in 2009. Palladium continued to make steady progress as a jewellery metal in Europe and North America. The Chinese jewellery market appeared to have stabilised and demand there was predicted to rise to 680,000 oz as recycling rates declined. Physical investment demand was also expected to be boosted by the lower price of palladium.

There were two special features in this edition. The first, ‘The Global Automotive Market in 2009’, discloses the varying factors affecting demand for platinum, palladium and rhodium for use in catalytic converters during 2009. The second special feature covers ‘Exchange Traded Funds’. Physically‐backed Exchange Traded Funds (ETFs) in platinum and palladium were launched in Europe in 2007, allowing investors from private individuals to pension funds to gain exposure to the prices of these metals. The understanding of investor behaviour gained from more than two years of history in these funds is discussed in the feature.

Availability of the Interim Review

“Platinum 2009 Interim Review” can be viewed and downloaded as PDF files in English, Chinese or Russian from the website Platinum Today, at: http://www.platinum.matthey.com/publications/pgm-market-reviews/. Alternatively a printed copy of the English version can be ordered by contacting Johnson Matthey via E‐mail at: platinum@matthey.com or by writing to: Johnson Matthey, Precious Metals Marketing, Orchard Road, Royston, Hertfordshire SG8 5HE, UK.