A curable composition, developed to bond securely to thermoplastic materials such as liquid crystal polymers and to metals such as Pd, consists of: (a) an organopolysiloxane with two or more alkenyl groups; (b) an organohydrogensiloxane with Si bonded to two or more H atoms; (c) a condensation catalyst, preferably Zr- or Al-based; (d) a pgm-based curing catalyst, preferably Pt-based, added in an amount equivalent to 0.1–1000 ppm, preferably 0.5–200 ppm, pgm relative to the mass of (a); and (e) an adhesion-imparting agent. The maximum and minimum refractive indices of (a), (a)+(b), and (e) differ by ≤0.03, giving the composition a high degree of transparency.

Haloalkylalkoxysilanes, 1, which are intermediates of coupling agents used in tyre manufacture, are prepared by reacting silanes, 2, with alkenylhalides, 3, in the presence of 5–900 mole ppm (based on limiting reagent) of an Ir catalyst, 4 or 5, at 20–200°C in an atmosphere containing <5% v/v O2. Haloalkylhalo-silanes, 6, are prepared by reacting silanes, 7, with 3 in the presence of 4 or 5. 6 may further be reacted with a C1–C6 alcohol. The activity of 4 or 5 is increased by limiting the O2 content of the reaction atmosphere.

Substituted biphenylanilides, 1, are prepared with high yield from a compound, 2, a diphenylboronic acid, 3, and a base such as NaOH(aq) in a mixture of water and a solvent such as ether, in the presence of a Pd catalyst selected from: (a) a Pd(0) complex such as Pd(PPh3)4 or Pd(PtBu3)4; (b) a Pd salt such as PdCl2 with 6–60 equiv. PPh3 as a complex ligand; or (c) optionally supported metallic Pd in the presence of PPh3, with phenyl groups optionally substituted by 1–3 sulfonate groups. The reaction is carried out at 50–120°C and 1–6 bar, with a low loading of Pd catalyst (0.001–1.0 mol% based on 2). The products, 1, are used as precursors for crop fungicides. 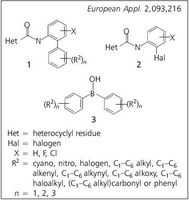 A catalyst for an LNT is formulated to counter thermal sintering by separating the Rh and Pt components. First (upstream) and second (downstream) catalyst beds are formed on a substrate, with the lower layer of each bed containing Rh and an alkaline earth- or alkali metal compound for NOx storage. The upper layer of each bed contains Pt and Pd, with the concentration of Pd being higher in the first bed than in the second, and the concentration of Pt being higher in the second bed than the first.

A catalyst suitable for CH4 removal from lean-burn engine exhaust containing SOx operates at 350–500°C, preferably 400–450°C. The catalyst is prepared by impregnating a porous ZrO2 support with Pt and Ir from solution(s) containing the necessary precursors, preferably at pH 3, followed by calcination. The Pt:Ir mass ratio is in the range 1:0.1–1:1.

A catalyst system for the oxidation of CO in H2 fuel cell feed has two catalysts, 1 and 2, held separately on a support. 1 consists of Cu plus a metal oxide, preferably Cu/MnO2 or Cu/CeO2. 2 contains a mixture of Pt with one or more of Fe, Ru, Co, Rh, Ir, Ni and Pd, preferably Pt-Co, Pt-Fe or Pt-Co-Fe on Al2O3. The upstream catalyst 1 is deposited at a higher loading so that the space velocity (SV) over 1 is lower than over 2. At 100°C, 1 has higher selectivity than 2, and/or 2 gives higher conversion than 1. The O2:CO ratio in the feed is 0.5–2.0, preferably 0.7–1.5. Good conversion of CO over a wide temperature range (80–220°C, preferably 100–220°C) and under variable SV makes the system suitable for automotive applications.

A highly-dispersed Pt alloy nanocatalyst with reduced Pt loading is formed by adding a C material, a Pt precursor such as PtCl4 (5–90 wt% relative to C), and a transition metal precursor such as NiCl2·6H2O (5–60 wt% relative to Pt) to anhydrous EtOH; adding CH3COONa powder, or EtOH in an NH3 solution; adding NaBH4 to reduce the metal ions; and washing and drying the mixture to yield a Pt alloy powder, for example PtNi/C.

An Os-, Ru- or Fe-based system for the quantitative detection and removal of the pollutant Cr6+ is preferably based on a tris-bipyridyl complex of Os2+, 1, capable of absorption of light in the 400–900 nm range. The change in the absorption spectrum of 1 in response to the reduction of Cr6+ in the presence of H+ may be monitored spectroscopically. 1 may be adsorbed on a transparent substrate such as glass or on beads or nanoparticles of a variety of materials, and used for the treatment of water by reduction of Cr6+. 1 can be regenerated by exposure of the resulting Os3+ complex to H2O.

An Au-Pt core-shell nanocolloid for use in immuno-chromatography is manufactured by forming Au particles with sizes 30–80 nm by reduction of an Au compound, followed by selective deposition of Pt nanoparticles with sizes ≤5 nm on the Au cores by reduction of a Pt compound such as chloroplatinic acid. The Au:Pt atomic ratio is 0.5:1–2:1. The mean particle size is 50–100 nm and the degree of dispersion about the mean is ≤0.08. The colloid has a maximum plasmon absorption peak at 517–540 nm. The method reproducibly produces highly spherical particles.

A magnetic impeller, which can be implanted in a patient suffering from heart failure and magnetically driven to assist in pumping blood, consists of a Pt-Co-B alloy that is biocompatible and resistant to corrosion and can form the entire blood-contacting surface of the pump. Alloy composition is preferably 42 at% Pt, 45 at% Co and 13 at% B, with a coercivity of 12–14 kOe.

A magnetic recording medium, described as having both thermal stability and good overwrite properties, has a first, 1, and second, 2, granular layer each composed of magnetic grains dispersed with an oxide. The magnetic grains are CoCrPt which for 1 are 5–15 at% Cr and 11–25 at% Pt and for 2 are 7–15 at% Cr and 11–17 at% Pt. The anisotropic magnetic field intensity of 1 is 13–16 kOe, and of 2 is 10–13 kOe. 1 and 2 are separated by a non-magnetic Ru or Ru alloy layer 0.05–1.5 nm thick, which provides an antiparallel exchange coupling between 1 and 2.

A low-cost method of preparing a substrate for a surface acoustic wave device uses a substrate sliced from a LiTaO3 single crystal, and contacted with a Rh or Pt-Rh alloy plate and heat-treated for 3–50 h at 800°C≤T<1650°C. Rh is found to diffuse effectively and homogeneously into the LiTaO3, with Rh concentrations of ∼300 ppm (after 3 h) and ∼890 ppm (after 50 h) at 1600°C, while Pt diffusion is minimal (<2 ppm).

A formulation and method of production for a cathode used in the electrolytic generation of H2 from H2O is disclosed, specifically suitable for use with an intermittent power source such as solar- or wind-generated power. The cathode has a metallic substrate, such as mild steel or Ni alloy, coated with 0.1–2.0 (preferably 0.4–1.0) mg cm−2 of Ru oxide obtained from a precursor such as a solution of RuCl3.

A method of producing a reflective positive electrode for a flip-chip type semiconductor light-emitting device is claimed. It has a pgm-based contact layer deposited between the reflective layer and the p-type semiconductor layer, 1, to counter diffusion of Ag or Al into 1. The contact layer is preferably Pt or a Pt alloy 0.1–4.9 nm thick, formed by radio frequency sputter deposition, followed by heat treatment at ≤350°C. To limit formation of Ag and Al precipitates between 1 and the n-type semiconductor, the electrode may additionally have a pgm-based overcoat layer ≥10 nm thick and in ohmic contact with 1 at a contact resistivity ≤10−3 Ω cm2.

A Ru powder composition is claimed, which when used for a sputtering target minimises impurities generated during deposition and gives a high-quality thin film of uniform thickness. The powder is ≥99.99% pure (excluding gaseous components), but an Al content of 5–50 ppm by weight, preferably 5–20 ppm, is found to be beneficial. Also claimed is a method for producing the powder from a Ru starting material with ≤99.9% purity, by electrolytic refining in an acidic or NH3 solution.

A method for simultaneously electroplating a substrate with Pt and a supplementary constituent is claimed. A specific embodiment has the electrolyte composed of: 25–55 g l−1 Pt(NO2)2(NH3)2; 1–200 g l−1 alkali metal (bi)carbonate; 0.2–80 g l−1 Cr metal powder with particles 1–50 µm in size; and optionally Al or another reactive element. When applied for oxidation and corrosion resistance, the coating may be 5–100 µm thick with 2–35 wt% Cr, or 15–25 wt% Cr plus 10–30 wt% Al. Heat treatment at 300–650°C bonds the electroplated layer to the substrate, or at 1000–1100°C interdiffuses the electroplated layer with the substrate.