“Asymmetric Catalysis on Industrial Scale: Challenges, Approaches and Solutions”, edited by Hans-Ulrich Blaser and Hans-Jürgen Federsel, builds and expands upon its first edition, which was published in 2004 (1). The second edition provides the reader with a comprehensive examination of the industrially important aspects of asymmetric catalysis, an area of organic chemistry that introduces chirality (a molecule that is non-superimposable upon its mirror image) to a molecule. This is especially important for pharmaceuticals, as biologically active compounds are often chiral molecules.

One of the book's co-editors, Hans-Ulrich Blaser, is currently Chief Technology Officer at Solvias in Basel, Switzerland, having previously spent twenty years at Ciba and three years at Novartis. The other co-editor, Hans-Jürgen Federsel, is Director of Science for Pharmaceutical Development at AstraZeneca in Sweden. He is recognised as a specialist in process research and development where he has worked for over 30 years.

The monograph is divided into 28 chapters, each containing stand-alone case studies of a particular chemical or biocatalytic process. This makes the text very easy to dip in and out of, or alternatively to look for specific examples of interest. The book highlights real world processing issues, showing how each has been tackled and solved by the authors. The main aim of this book is to show that asymmetric catalysis is not merely the preserve of academic research; rather, it is a large-scale production tool for industrial manufacturing. However, just as importantly it provides support and ideas for those suffering with similar issues in optimising industrial syntheses.

The reader of this book is required to have a relatively advanced knowledge of organic chemistry in order to fully appreciate the complexities of the vast range of reactions covered. It is aimed primarily at postgraduate level and particularly at those involved in the pharmaceutical and process chemistry industries. The book combines both organic chemistry and biochemistry in almost equal measure and so a good understanding of biological compounds and reactions is also required.

The chapters are written by a grand total of 87 different authors from a plethora of pharmaceutical companies around the world, as well as a few chemicals companies and universities. The lengths of the chapters are such that a solid overview is provided, without overloading the reader with information. All reaction schemes are well drawn and are generally complemented with graphs and spectra of the synthesised compounds, as well as some photographs and process flow sheets to demonstrate some very elegant engineering solutions. Furthermore, the chapters are well referenced, allowing easy access to further information and literature should the reader so require.

Due to the broad scope of this book, in terms of the variety of reactions and processes covered, this review will only focus on those involving platinum group metal (pgm) catalysts. It will not cover non-pgm catalytic processes or those involving biological catalysis, of which there are many interesting examples.

In terms of coverage, as expected in this particular field, the pgms feature heavily throughout, with one or more of the metals being referred to in 17 of the 28 chapters. In fact, Chapter 20, which examines asymmetric hydrogenation for the design of drug substances, features all five of the pgms that are most widely used for catalytic applications: platinum, palladium, rhodium, iridium and ruthenium.

Interestingly, the book is arranged by process rather than perhaps a more orthodox method of segmenting by catalyst type or chemical transformation. The reasoning behind this is that it enables readers to find out how particular issues have been solved on a process level, which should prove useful to the industrial practitioner.

The chapters are grouped into three sections:

Throughout this book the importance of process development and scale-up, taking laboratory-scale products to pilot plant and subsequently full-scale production of active, pure products is impressed upon the readers.

The range of enantioselective catalysis shown in this book highlights the growing importance of developing more selective, active and ultimately more cost-effective processes for the production of specific biologically active compounds.

The first section of the book contains five chapters, each of which examines either new catalysts or new routes to produce existing compounds for such products as cholesterol-lowering, cough-relieving or anti-obesity drugs, as well as vitamins and indigestion remedies. Asymmetric hydrogenations catalysed by Ru, Ir or Rh feature heavily, especially in Chapter 2 in which Kurt Püntener and Michelangelo Scalone (F. Hoffmann-La Roche Ltd, Switzerland) present five example syntheses showing how the hydrogenation of different functional groups has led to significant improvements in the production of active pharmaceutical intermediates (APIs).

Chapter 3 takes a detailed look at the use of asymmetric hydrogenation in the production of (+)–biotin (vitamin H). This compound has three stereocentres that need to be controlled to produce the pure, active compound that can produce full biological activity in the body. The reader is led through the history of biotin production (today a 100 tonne per year industry) from the original eleven-step Goldberg-Sternbach concept involving a palladium-catalysed hydrogenation step, through to the much shorter and more elegant Lonza process, utilising a rhodium-catalysed asymmetric hydrogenation step (Scheme I). The often lengthy reaction schemes are very well drawn out and highlight the complexities associated with this particular synthesis. 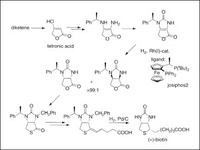 Chapter 5 covers the important reaction of asymmetric ketone reduction, which despite being academically well understood poses significant issues in complex biological molecules on an industrial scale. This chapter highlights the groundbreaking work by Ryoji Noyori, who won the 2001 Nobel Prize in Chemistry with William S. Knowles for their work on chiral hydrogenation reactions catalysed by Rh and Ru complexes (2). This has influenced the work in this chapter and much of the rest of the book. Andreas Marc Palmer (Nycomed GmbH, Germany) and Antonio Zanotti-Gerosa (Johnson Matthey Catalysis and Chiral Technologies, UK) tell the story of how selectivity and activity can be tuned by the optimisation of ruthenium phosphine complexes such as those shown in Figure 1 for large-scale reactions.

The second section contains fourteen chapters categorised as new catalyst and process developments for synthetically important building blocks, nine of which mention pgms. Chapter 16 in particular demonstrates the effectiveness of pgms with mention given to Pd, Rh, Ir and Ru in a particularly in-depth analysis of asymmetric transfer hydrogenation.

The technique of asymmetric transfer hydrogenation is an important method for producing optically active alcohols and amines (for example, Scheme II). The authors spend considerable time in this chapter discussing the reaction components before moving on to some case studies to illustrate their use. This is certainly one of the most detailed chapters, and it is well supported by a series of tables, reaction schemes and graphs.

The final section is the least relevant in terms of pgm use, with five of the remaining nine chapters not featuring the metals. However, one of the stand-out reviews in terms of pgm catalysis is Chapter 20. This chapter, entitled ‘Enabling Asymmetric Hydrogenation for the Design of Efficient Synthesis of Drug Substances’ and written by Yongkui Sun, Shane Krska, C. Scott Shultz and David M. Tellers (Merck & Co, Inc, USA), includes examples of catalysed steps involving platinum, palladium, rhodium, iridium and ruthenium during the course of the text.

The chapter begins with an introduction once again paying tribute to the great work by Knowles and Noyori in the field of asymmetric hydrogenation. It then talks about the work done by Merck chemists to increase the use of asymmetric catalysis in drug discovery programmes within the company. The chapter drives home the key message that by identifying and having a concerted effort to utilise and improve a particular reaction, unprecedented progress could be made.

Three detailed case studies born out of Merck's ‘Catalysis Initiative’ are then recounted: laropiprant, an API in the cholesterol-lowering drug TredaptiveTM; taranabant, an API in the treatment of obesity; and sitagliptin, an API in the treatment of type 2 diabetes (Figure 2) (Scheme III). All three demonstrate the vital importance of high-throughput screening to optimise both catalyst and reaction conditions within a constrained time-frame. The whole chapter is a success story for the Merck ‘Catalysis Initiative’ and should serve as inspiration to other companies in the search for new methods for large-scale drug production.

The structures of laropiprant, taranabant and sitagliptin

This book contains a comprehensive examination of a wide range of industrially important asymmetric reactions. It clearly shows the difficulties and challenges associated with these reactions, and more importantly how scientists and engineers have managed to successfully overcome them. The pgms feature in a large proportion of the syntheses and processes mentioned, with palladium-catalysed hydrogenations and the work of Knowles and Noyori being particularly significant.

The book is easy to read and well illustrated and referenced throughout. The decision to group the chapters by the nature of the process works well, with the tables at the front of the book easily directing readers to subjects of interest. The key aim of this book, to show that asymmetric catalysis is not merely the preserve of academic research, is driven home in every chapter. The relevance of each reaction and synthesis to the industrial environment is made abundantly clear through a wide array of case studies.

Overall, this book will be of interest to both industrial specialists and academics as it contains a good mix of chemistry and engineering. It provides comfort and inspiration to those working in this field through the numerous success stories told and is undoubtedly a useful source of potential contacts for those struggling with a particular asymmetric synthesis issue. 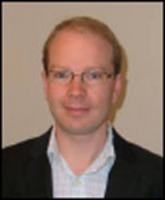 Dr Stewart Brown graduated with an MChem (Hons) and a PhD in Chemistry from the University of Liverpool, UK. He joined Johnson Matthey in 2004 and spent 5 years as a Process Development Chemist, involved in the scale-up of new catalysts and processes for the Emission Control Technologies business unit. In 2009 he transferred to Precious Metals Marketing and is currently a Market Analyst within the Market Research team, focusing on the chemical, electronics, automotive and petroleum refining sectors.