Non-crosslinked soluble polystyrene-supported Ru nanoparticles were prepared by reacting [RuCl2(C6H5CO2Et)]2 with polystyrene in air. The supported Ru nanoparticles can be used to catalyse intra- and intermolecular carbenoid insertion into C–H and N–H bonds, alkene cyclopropanation and ammonium ylide/[2,3]-sigmatropic rearrangement reactions and can be recovered and reused ten times without significant loss of activity.

A dinuclear metal complex, for example 1, containing a light-harvesting Os(tpy)22+ moiety and a catalytically active diphosphine Rh moiety can be used as a photocatalyst for decomposing H2O to produce H2. The photocatalyst is prepared by cross-coupling a terpyridyl Os complex with phenylboronic acid pinacol ester having a phosphinothioyl group in the presence of a Pd catalyst to obtain the corresponding phosphine sulfide. This is reacted with Raney Ni to give a diphosphine ligand having an Os(tpy)22+ moiety. This ligand is mixed with a transition metal complex such as [RhCl(CO)2]2 in a suitable solvent at room temperature to obtain the dinuclear metal complex. 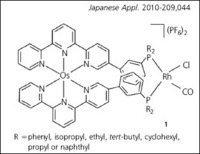 A recyclable fixed-bed catalyst complex containing a silica-supported Pt carbene catalyst is claimed for use in a hydrosilylation process between an olefin, silicone or alkyne and a silicone to produce an organofunctional silane and/or a crosslinked silicone which contains <20 ppm residual Pt, preferably <10 ppm. The process can be repeated between 3–100 times over a period from 1 week to 1 year without new addition of catalyst complex. It may be used in a continuous reactor system.

Novel fluorophosphite compounds active for hydroformylation processes for ethylenically unsaturated substrates are claimed. Catalyst solutions contain 20–300 mg l−1 Rh with a mole:atom gram ratio of fluorophosphite:Rh between 1:1–200:1. The hydroformylation activity increases as the concentration of ligand increases. Linear or branched aldehydes can be produced under standard hydroformylation reaction conditions of 75–125°C and 1–70 bar (15–1000 psig).

Pd-enriched DOCs are claimed for the oxidation of CO and HC emissions from a compression ignition/diesel engine. A first washcoat covers 25–95% of the substrate from the inlet and may contain Pt:Pd in a ratio for example 1:1; a second washcoat is richer in Pd than the first washcoat, with a Pt:Pd ratio for example 1:2, and covers 5–75% of the substrate from the inlet. The catalysts are described as having increased performance and hydrothermal durability under cold start conditions.

Electrode catalysts formed from Pt or Pd, preferably Pt, alloyed with Sc, Y and/or La on a conductive support material are claimed for use in a PEMFC. The catalysts are described as having increased ORR activity, comparable active site density and lower cost compared to pure Pt. The activity enhancement is stable over extended periods of time.

A nanoscale catalyst layer for a FC is formed from a Au core having average particle diameter <10 nm with a Pt shell. The Au and Pt may form an alloy. Initial activity is good and dissolution of Pt is suppressed.

A white Au alloy free of Ni and Cu contains (in wt%): >75 Au; 18–24 Pd; 1–6 In, Mn, Hf, Nb, Pt, Sn, Ta, V, Zn and/or Zr; optionally >0.5 Si, Ga and/or Ti; and optionally >0.2 Ru, Ir and/or Re. The alloy is prepared by placing the components in a crucible; melting the components; pouring the molten alloy; allowing to harden; quenching in water; subjecting to at least one cold rolling; and annealing under reducing atmosphere. The alloy is described as having suitable mechanical properties for watch making and jewellery use, and does not require Rh plating.

Ir and Rh alloys with increased creep rupture strength at high temperature, in particular at ∼1800°C, are claimed. 0.5–30 ppm B and 0.5–20 ppm Ca are added to Zr- and Hf-free Ir, Rh or alloys thereof. The alloys may also be free of Ti. The strengthened Ir alloys may be used in Ir crucibles for growing single crystals such as Nd:YAG laser crystals or in components for the glass industry.

A Pd alloy composite membrane for hydrogen separation is prepared by depositing a layer of Pd on a porous metal or ceramic support, preferably Ni, using a dry sputtering deposition process; depositing a layer of Cu on the Pd layer; and heat treating to form an alloy. Optionally a first layer of Ag, Ni, Cu, Ru or Mo may be formed before depositing Pd.

Glass manufacturing apparatus which reduces the formation of bubbles in optical or display glass is claimed. A dry coating containing a glass powder and a ceramic powder is formed on the outer surface of a Pt container. The coated Pt container is then surrounded by a refractory layer containing >97 wt% Al2O3 and SiO2 and fired.

A gas discharge lamp includes a gas discharge vessel filled with S, Se, Te or a compound thereof and an electrode assembly in which the electron-emissive material is 80–100 wt% Ir optionally alloyed with Ru, Os, Rh, Pd or Pt. The Ir-based electrode has a high melting point and resists chemical reaction with the gas filling, providing a long-lived, efficient, compact and high intensity white light source for applications such as general and professional illumination.

Ru compounds for treating proliferative diseases, in particular cancer, are claimed, together with pharmaceutical compositions containing the same. Preferred compounds include 1 and 2. 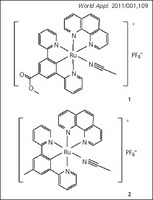