Final Analysis: Flame Spray Pyrolysis: A Unique Facility for the Production of Nanopowders

Final Analysis: Flame Spray Pyrolysis: A Unique Facility for the Production of Nanopowders

Flame spray pyrolysis can be used to produce a wide array of high purity nanopowders ranging from single metal oxides such as alumina to more complex mixed oxides, metals and catalysts. The technique was first developed by the research group of Sotiris E. Pratsinis at ETH Zurich, Switzerland (1). Since then it has been used to create new and sophisticated materials for catalysis and other applications (2).

Johnson Matthey has developed its own Flame Spray Pyrolysis Facility (Figure 1) which produces a range of nanopowders using the flame spray pyrolysis technique. It has the capacity to produce up to 100 g h−1 of nanopowder product, depending on the material composition, and a number of process variables enable the preparation of well-defined target materials.

Flame spray pyrolysis is a one step process in which a liquid feed – a metal precursor(s) dissolved in a solvent – is sprayed with an oxidising gas into a flame zone. The spray is combusted and the precursor(s) are converted into nanosized metal or metal oxide particles, depending on the metal and the operating conditions. The technique is flexible and allows the use of a wide range of precursors, solvents and process conditions, thus providing control over particle size and composition.

A range of oxide-based materials have been prepared using the technique and some examples are illustrated in Table I. Some of these materials find uses in catalysis, electronics, thin film applications and other areas. Additionally the transferable knowledge gained can be applied to the synthesis of pgm catalysts and supported pgm catalysts by the flame spray method.

[i]
a
Determined by TEM analysis

[ii]
b
Determined by BET analysis

A 2 wt% Pd/Al2O3 catalyst was prepared from an organometallic palladium compound and an aluminium alkoxide in a organic solvent. The solution was fed into the spray at 5 ml min−1 in an oxygen stream of 5 l min−1. The spray was then combusted with a pre-ignited flame of methane/oxygen. The resulting product (Figure 2) had a specific surface area of 145 m2 g−1 with a Pd dispersion around 30% as determined by CO chemisorption. 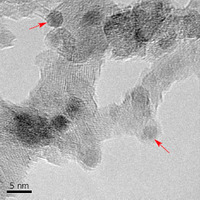 The catalyst was tested in the hydrogenation of nitrobenzene to produce aniline, using 0.5 g of nitrobenzene in 5 ml of ethanol at 3 bar and 50°C. Its performance was found to be comparable to that of commercially available Pd/Al2O3 and Pd/C catalysts. This demonstrates that the Pd particles in the flame spray samples are well dispersed throughout the support and give rise to a high metal surface area available for catalysis.

Study of the effects of the process parameters including spray conditions and precursor chemistry on catalyst characteristics is ongoing.

The flame spray pyrolysis technique allows for the preparation of a vast range of materials, including metastable phases, due to the rapid quenching process. Johnson Matthey has dedicated much effort to the application of the technique to the synthesis of catalysts. Further scale-up will be critical and work is ongoing via an EU funded project aimed at achieving a production capacity over 10 kg h−1. To increase our know-how and satisfy other interest areas, more work utilising the technique is also ongoing via other EU and UK Technology Strategy Board (TSB) funded projects.

The creation of the development-scale Flame Spray Pyrolysis Facility at JMTC, Sonning Common, was partly funded by a grant provided by the UK's former Department of Trade and Industry (DTI) under its Micro and Nano Technology (“MNT”) Network initiative.

Dr Bénédicte Thiébaut joined Johnson Matthey twelve years ago and worked on numerous projects specialising in the last seven years in the nanotechnology area. She initially investigated the synthesis of nanomaterials by solution routes and turned her interest to other methodologies including the flame spray pyrolysis (FSP) technique.