The 12th Dalton Discussion (DD12) conference was held at Durham University, UK, from 13th–15th September 2010 (1). It was the first Dalton Discussion to have been jointly organised by the Dalton and Organic Divisions of the Royal Society of Chemistry (RSC). A special issue of Dalton Transactions, containing refereed papers (both original and perspective articles), accompanied all the presentations at the conference (2). The DD12 meeting was supported by generous sponsorship from BP, Pfizer and the Dalton and Organic Divisions of the RSC, and poster prizes were provided by Springer, Dalton Transactions and Catalysis Science and Technology.

The principal aim of DD12 was to bring together both organic and inorganic chemists from around the world to highlight and discuss important aspects relevant to the design, development and application of late transition metal-catalysed protocols involving the activation of either carbon–X (X = halogen or pseudohalogen) or carbon–hydrogen bonds. The investigation of mechanism and synthetic applications of catalytic processes by both experimental and theoretical methods underpinned many of the oral and poster contributions at the conference.

It was quite fortuitous that DD12 occurred just a few weeks prior to the announcement on 6th October 2010 that the Nobel Prize in Chemistry 2010 would be awarded to Professors Richard F. Heck, Ei-ichi Negishi and Akira Suzuki for work in the field of palladium-catalysed cross-coupling reactions in organic synthesis (3), which highlights the general importance and timeliness of the topic.

Over one hundred delegates attended DD12 from across Europe, Asia, the Middle East and North America. Both academic and industrial groups were represented at the conference, with around 25% of attendees being from major industrial organisations.

The DD12 meeting comprised eight single sessions run over three days. Individual sessions began with either a Keynote lecture or an invited lecture. These were followed by three five-minute contributed presentations. With the exception of the sixth session (see below), questions were taken during the lively and lengthy discussions held after all of the session lectures had taken place.

Professor Todd Marder (Durham University, UK) chaired the first session of the meeting. Professor Hans de Vries (DSM Pharmaceutical Products, The Netherlands) gave the Keynote lecture, which provided an overview of cross-coupling reactions and issues of ‘ligand design’ versus ‘ligand-free’ catalysis. His lecture nicely set the tone of the meeting and stimulated lots of discussion; for example, on the nature of the catalytically active species and the role of palladium nanoparticles. Professor de Vries then went on to present several mechanisms for the modified Ullmann reaction, highlighting the importance of copper(III) species, but also issues surrounding the complex catalytic reaction systems.

A careful study of manganese-catalysed C–H oxidation with hydrogen peroxide showed that specially designed multidentate ligands were oxidised to pyridine-2-carboxylic acid prior to catalytic substrate oxidation, which explains the observed catalytic activity (Scheme I). This work by Wesley R. Browne (University of Groningen, The Netherlands) showed that some caution should be exerted in ligand design, metal catalysis and reaction mechanism analysis, especially where the ligand can change chemical form under the catalytic reaction conditions used.

The second session was chaired by Warren B. Cross (University of Leicester, UK) who introduced a Keynote lecture from Professor Aiwen Lei (Wuhan University, China). Professor Lei discussed selective oxidative cross-coupling using palladium(II) catalysis (with a suitable oxidant) between two different nucleophiles (for example Process A, Scheme II) and went on to elaborate on issues surrounding the rates of reductive elimination processes. Crucially, fast reductive elimination and transmetallation rates were found to determine the selectivity of the heterocoupling reaction.

George Fortman (University of St Andrews, UK) discussed work on the synthesis of gold–acetylides formed by alkyne C–H activation. The serendipitous discovery of a palladium-catalysed regioselective C–H functionalisation of 2-pyrones was then reported by Professor Fairlamb. Two catalysts were used in this work, namely trans-Pd(Br)N-Succ(PPh3)2 and Pd2(dba-4-OMe)3 (N-Succ = succinimide; dba-4-OMe = 1,5-bis-(4′-methoxyphenyl)penta-1E, 4E-dien-3-one).

The third session of the meeting was chaired by Professor Fairlamb, and began with a Keynote lecture by Professor Jennifer Love (The University of British Columbia, Canada). Love presented a brief overview of carbon–fluorine activation processes including cross-coupling reactions of polyfluoroarenes. She focused on the development of nickel and platinum catalyst systems for arylboronic acid cross-coupling with fluoroarenes containing ortho-directing groups. This presentation was followed by Professor Philippe Dauban (Centre National de la Recherche Scientifique (CNRS), France), who presented studies of catalytic aminations involving nitrene insertion into C–H bonds (Scheme III). The selective C–H functionalisation of secondary methylene carbon centres in the presence of other secondary sites was a particular highlight. 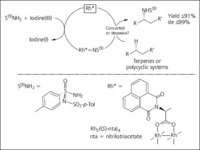 During the discussion session of these lectures, several of the pharmaceutical chemists present at the meeting debated the role of fluoroaryl groups in pharmaceutical compounds. Several viable synthetic methods for incorporating fluoro substituents into arenes were highlighted.

The fourth session of DD12 was chaired by Professor Susan Gibson (Imperial College London, UK), and began with an invited lecture by John M. Brown (Oxford University, UK). Brown introduced anilide activation of adjacent C–H bonds in the palladium-catalysed Fujiwara-Moritani reaction using catalytic Pd(OAc)2 in the presence of tosic acid and p-benzoquinone. Kinetic aspects such as induction periods and palladacycle formation were presented as well as synthetic aspects. During the discussion session a number of mechanistic aspects of these processes were raised, which led to David (Dai) Davies (University of Leicester, UK) defining the ambiphilic metal ligand activation (AMLA) process in which the number of atoms thought to be involved in the transition state is specified, as illustrated in Scheme IV for AMLA-4 (4 electrons) and AMLA-6 (6 electrons) intermediates which are of general relevance to C–H activation. The concerted metalation-deprotonation (CMD) is identical to AMLA-6.

Esteban P. Urriolabeitia (University of Zaragoza, Spain) reported stoichiometric and catalytic regioselective C–H functionalisations including a palladium-catalysed oxidative etherification of iminophosphoranes. Finally, a combined theoretical and experimental study on the use of ruthenium vinylidene complexes as catalysts for carbon–oxygen bond formation was presented by Jason M. Lynam (University of York, UK). The role of carboxylate ‘acetate’ ligands was discussed, and a variant of the AMLA/CMD mechanism proposed, namely the ligand-assisted-proton shuttle (LAPS) (Scheme V).

The fifth session was chaired by Anthony Haynes (The University of Sheffield, UK). Professor Zhang-Jie Shi (Peking University, China) gave an interesting presentation, particularly the unusual results of a ‘metal-free’ coupling of an aryl halide with an arene using potassium tert-butoxide and 1,10-phenanthroline (4).

Dai Davies went on to present alkyne insertion reactions of cyclometallated pyrazole and imine complexes of iridium, rhodium and ruthenium, with emphasis on establishing substrate/catalyst/product correlations through detailed structural and spectroscopic studies. The last speaker of the session, Xavi Ribas (Universitat de Girona, Spain), discussed reductive elimination from a ‘model’ aryl–Cu(III)–halide species which was triggered by a strong acid, and its relevance to the mechanism of Ullmann-type couplings (Scheme VI).

The sixth session was chaired by Professor Peter Scott (The University of Warwick, UK), and the first invited lecture was from Professor Robin Bedford (University of Bristol, UK). Bedford presented an introduction to the field of ‘C–H activation’, and went on to discuss mild and selective ‘solvent-free’ aromatic C–H functionalisation/halogenation reactions catalysed by Pd(OAc)2. The second lecture was given by Professor Fairlamb on surface-catalysed Suzuki-Miyaura cross-coupling over palladium nanoparticles stabilised by polyvinylpyrrolidinone (PVP). This work, in collaboration with Professor Adam Lee, gave details about the reaction mechanism, including results from kinetic studies, X-ray photoelectron spectroscopy (XPS) and X-ray absorption spectroscopy (XAS), of a heterogeneous surface-catalysed Suzuki cross-coupling (Figure 1). Extended X-ray absorption fine structure (EXAFS) measurements proved particularly informative in showing that palladium nanoparticles do not change size in a typical Suzuki-Miyaura cross-coupling. Finally, Professor Yoshiaki Nakao (Kyoto University, Japan) presented a nickel-catalysed alkenylation of aromatic C–H bonds in indoles and pentafluorobenzene.

Palladium-surface catalysed Suzuki-Miyaura cross-couplings (From A. F. Lee et al., in (2). Reproduced by permission of The Royal Society of Chemistry) 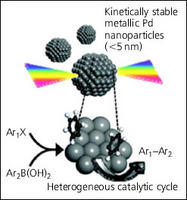 The seventh session was chaired by Jason M. Lynam and the Keynote lecture was given by Professor William D. Jones (University of Rochester, USA). Professor Jones discussed various kinetic and thermodynamic aspects of C–H bond activation by transition metals. A key focus of the lecture was placed on the ortho-fluorine effect by drawing on both rhodium–carbon and carbon–hydrogen bond energy correlations in a series of fluorinated aromatic hydrocarbons (Figure 2). Professor Robin Perutz (University of York, UK) delivered a presentation on studies in collaboration with Professor Odile Eisenstein (Université Montpellier II, France), discussing the effect of ortho-fluorine substituents on Pd/C catalysed C–C bond formation, particularly C–H functionalisation and the CMD/AMLA-6 mechanism. Together, the Jones and Perutz presentations showed that one should consider both C–H acidity and metal–carbon (aryl) bond strengths when explaining the regioselective C–H functionalisation accelerated by ortho-fluorine substituents.

The ortho-fluorine effect in promoting carbon–hydrogen activation. RRh–C/C–H = slope of line on plot of Rh–C vs. C–H bond strength (From T. Tanabe et al., in (2). Reproduced by permission of The Royal Society of Chemistry)

The final session was chaired by Professor Odile Eisenstein, and began with an invited lecture by Professor Stuart Macgregor (Heriot-Watt University, UK). Macgregor delivered an introduction to theoretical approaches, following previous comments on the strengths, weaknesses and pitfalls of certain aspects of density functional theory (DFT) calculations. More detailed computational studies were presented on catalytic alkene hydroarylation with [CpIr((κ2-OAc)(PH3)]+, with particular emphasis on the AMLA-6 mechanism. This once again highlighted the key role played by the ‘flexible’ acetate ligand. Eric Clot (Université Montpellier II, France) went on to present a DFT study of the mechanism of Pd(PR3)-catalysed benzocyclobutene formation via C(sp3)–H activation. In the final presentation, Professor Mike George (The University of Nottingham, UK) presented a combined experimental (fast time-resolved infrared spectroscopy (TRIR)) and theoretical investigation of the C–H activation of cyclic alkanes by cyclopentadienyl rhodium(I) carbonyl complexes. He highlighted the inherent mechanistic differences in C–H activation of linear versus cyclic alkanes by half-sandwich rhodium complexes. Interestingly, C–H activation in cyclic alkanes depends primarily on the strength of alkane–metal binding. Note that this paper appeared in a later issue of Dalton Transactions (5).

Following the conference dinner in the famous Durham Castle, Professors Love and Perutz awarded four poster prizes. The poster content of the awardees (Figure 3) highlighted the breadth of subjects covered and the high standard of all of the posters presented at the meeting. The winning posters were: 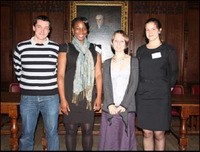 From the oral presentations, numerous posters and lively discussions at the DD12 meeting, there was overwhelming evidence that a better understanding of the mechanisms of metal-catalysed C–X and C–H functionalisation processes is emerging. Quite strikingly, studies in inorganic and organometallic coordination chemistry, theoretical and kinetic studies, new synthetic methodologies and applications are driving this understanding. The platinum group metals play an important role in many of the catalytic processes under discussion.

As a first joint discussion conference between the RSC Dalton and Organic Divisions, it was a great success, and showed quite clearly that both the organic and inorganic communities need to work together to deliver powerful, clean and efficient methods for the preparation of functionalised organic building blocks and fine chemicals. 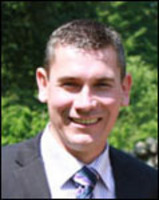 Professor Ian Fairlamb is currently a Full Professor in Organic Chemistry at the University of York, UK, and has research interests in catalysis, synthetic chemistry, mechanistic understanding, nanocatalysis, metals in medicine, and applications of catalysis in chemical biology. In 2004, he was awarded both a Royal Society University Research Fellowship and the Royal Society of Chemistry Meldola Medal and Prize for outstanding contributions to the field of palladium chemistry in synthesis.