Durability and Degradation Issues in PEM Electrolysis Cells and its Components

Durability and Degradation Issues in PEM Electrolysis Cells and its Components

The second international workshop organised by the NOVEL EU-funded programme

The second workshop on “Durability and Degradation Issues in PEM Electrolysis Cells and its Components” was held at Fraunhofer-Institut für Solare Energiesysteme ISE in Freiburg, Germany, from 16th–17th February 2016. The workshop was organised as part of the European Union (EU)-funded 7th Framework Programme, NOVEL, of which project Johnson Matthey Fuel Cells is a partner, along with several other European companies and research institutions. The workshop was attended by over 100 people from all around the world; however, the majority came from Germany.

The talks were given by several NOVEL partners, electrolysis system manufacturers and research institutions or universities, and were followed by short question and answer sessions (Figure 1). The presentations described here can be freely accessed on the workshop web page (1).

Why hydrogen? Hydrogen is an energy carrier able to facilitate decarbonisation of the energy system. Coupling renewable energies and hydrogen, new market opportunities for electrolysis (Reproduced from (1) with kind permission from Tom Smolinka, Fraunhofer ISE)

Magnus Thomassen (SINTEF, Norway) headed up the NOVEL talks, introducing the audience to the project and its main targets and achievements. NOVEL has focused on all areas necessary for improving the performance and reducing the cost of polymer electrolyte membrane (PEM) electrolysis, including degradation protocols, novel membranes and catalysts, bipolar plates and stack testing.

Lorenz Gubler (Paul Scherrer Institut (PSI), Switzerland) spoke to the audience about NOVEL’s work on novel membranes for PEM water electrolysis. There is a resistance-gas crossover ‘trade-off’ with electrolysis membranes, which means that the operational range can be limited. NOVEL has focused on increasing the gas barrier properties of electrolysis membranes and has taken two approaches within the project. The first approach is PSI’s radiation grafted membrane, comprising chemically and mechanically robust polymers (such as ethylene tetrafluoroethylene (ETFE) or ethylene chlorotrifluoroethylene (ECTFE)) grafted with a styrenic monomer, which is later sulfonated, a co-monomer and a cross-linker (2). The radiation grafted membrane gave similar performance to Nafion® 117 membrane, but lowered the gas crossover by ~50%, as demonstrated in Figure 2(a). NOVEL’s alternative membrane approach is Johnson Matthey’s reinforced polyfluorosulfonic acid (PFSA) membrane, which is adapted from an automotive membrane, measures just 60 μm in thickness and has functionality included within it that reduces hydrogen crossover. The effect of the addition of recombination catalyst functionality is shown in Figure 2(b). 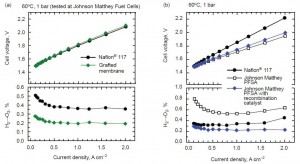 Georg Andreas (Fraunhofer ISE) summarised the ongoing work within NOVEL by both Fraunhofer ISE and Teer Coatings Ltd, Miba Coatings Group, UK, on coatings for bipolar plates and current collectors. Titanium is frequently used for electrolyser bipolar plates and current collectors, but when left uncoated, it can form a highly resistive oxide passivation layer. The thickness of the passivation layer can be estimated by its colour. Protective coatings are recommended for use on these parts to prevent the growth of the passivation layer and to prevent drops in conductivity and cell efficiency. Sputtered coatings from Teer Coatings Ltd, Miba Coatings Group have been shown to decrease the contact resistance both before and after corrosion testing.

Frederic Fouda-Onana (French Alternative Energies and Atomic Energy Commission (CEA), France) talked about the accelerated stress tests designed by CEA to test the NOVEL membrane electrode assemblies (MEA). Historically, there have been fewer research activities aimed at shedding light on durability and degradation in PEM electrolysers than fuel cells. It is believed that most of the cell components of a PEM electrolyser will degrade i.e. the anode and cathode catalyst layers, the membrane and the bipolar plates. Four accelerated stress test (AST) protocols were devised by CEA to focus on different causes of degradation and contributing factors. Ageing was found to be more prominent at high current density due to the increased resistance and higher efficiency losses. AST protocols were also shown to have a number of effects depending on which one was used: membrane thinning, electrode degradation, fluoride transfer from membrane to cathode (3) and increased resistance were all observed.

Ed Wright (Johnson Matthey Technology Centre, Sonning Common, UK) spoke about Johnson Matthey Fuel Cells’ work on the link between non-uniformity in PEM electrolysis MEAs and high gas crossover. Higher gas crossover was observed with novel anode catalysts and lower loading or thinner anode catalyst layers (Figure 3). The effect is believed to be more of a problem with newer, thinner membranes, as they will reduce the ability of the catalyst coated membrane (CCM) to cope with hardware non-uniformity; uneven compression for example. Johnson Matthey Fuel Cells found that hydrogen crossover can be controlled by using thicker or more compressible cathode layers, which are believed to improve tolerance to non-uniformity issues (Figure 3).

Moving on to non-NOVEL talks, Tomás Klicpera (Functional Membranes and Plant Technology (FuMA-TECH BWT GmBH, Germany)) presented an overview of the different membranes that FuMA-Tech have available for PEM water electrolysis. Its membranes can swell significantly in the z-direction by up to 40% and are very sensitive to cell assembly. Furthermore, it has had to work through performance problems with its membranes – membranes giving bad performance for one customer have been found to give excellent performance for another customer. Klicpera finished off by stating that FuMA-Tech believe that a simpler membrane, such as a woven web reinforced membrane, is a better choice for PEM water electrolysis.

Insights into PEM electrolysis capabilities and requirements at the larger stack-level were provided by National Renewable Energy Laboratory (NREL), USA, and the electrolysis system manufacturer, Proton OnSite, USA. Kevin Harrison (NREL) introduced us to NREL’s goal of integrating its renewable hydrogen system to provide support to the grid and to reduce the cost of hydrogen. NREL is currently producing around 50 kg of hydrogen per day, which it intends to double by the end of 2016. It compresses and stores its hydrogen for lab use as well as for fuelling fork lifts and buses, and will produce a 250 kW stack this year.

Proton OnSite has been working with hydrogen energy systems for 20 years and has racked up hundreds of thousands of hours worth of stack testing and data. Everett Anderson (Proton OnSite) stated that it has achieved ~60,000 hours lifetime in its commercial stacks without any detected voltage decay. With its megawatt-scale M-series stack demonstration, it has recently achieved over 500,000 cumulative stack cell testing hours without failures and without any loss in efficiency. Its biggest problem affecting reliability and durability is customer contamination. Anderson stated that Proton OnSite is interested in finding reliable accelerated stress tests to understand the degradation mechanisms of polymer electrolyte membrane water electrolyser (PEMWE) and to shorten development times.

Marcelo Carmo (Forschungszentrum Jülich (FZJ), Germany) spoke about his work on both anode and cathode catalysts for PEMWE and their degradation. PtxMy alloy cathode catalysts (M = cobalt, iron, nickel, bismuth) were de-alloyed via acid leaching and compared with standard platinum/carbon. The cathodes were durability tested by cycling for one week in 0.5 M sulfuric acid at 60°C. FZJ did not observe a difference in durability and performance between cathodes of loading 0.8 mg Pt cm–2 and cathodes of loading 0.05 mg Pt cm–2. Additionally, a benchmark iridium black catalyst was used for an anode loading study. Initial performance at a low loading, for example, 0.3–0.6 mg Ir cm–2 was similar to initial performance at a high loading, for example, 2.25 mg Ir cm–2. However, the extent of degradation experienced with lower anode loadings was larger than that experienced with higher anode loadings. Carmo recommended that if low anode loadings are to be utilised for PEMWE, then anode supports are required otherwise the layers are too thin to be durable due to low catalyst areas.

Antonino Aricò (Consiglio Nazionale delle Ricerche (CNR)-Instituo di Tecnologie Avanzate per l’Energia (ITAE), Italy) summarised work on degradation mechanisms and low catalyst loadings during the Fuel Cells and Hydrogen Joint Undertaking funded project, ElectroHypem. CNR-ITAE studied MEAs comprising of an IrRuOx anode, a Pt/C cathode and an Aquivion® membrane (4). The contributing factors to PEM electrolysis performance degradation were found to be: accumulation of Na and Fe in the catalyst; loss of Ru from IrRuOx anode; degradation of the Ti plates; membrane thinning and restructuring. Aricò suggested mitigation of degradation via pre-leaching of catalysts in acid to remove impurities; Ir surface enrichment of the anode catalyst; chemical stabilisation of the membrane and in agreement with NOVEL findings, coating of Ti plates. Similar to Carmo’s work, it was found that a reduced total catalyst loading resulted in an increased degradation rate.

The workshop provided an excellent opportunity for review and discussion of the growing area of PEM water electrolysis and was well attended by a range of international researchers. PEM water electrolysis was shown to be a promising area of research that is steadily growing in an effort to provide a fossil-free source of hydrogen. The workshop also provided an opportunity for consortium members of the EU-funded programme, NOVEL, to summarise their progress and achievements within the field before the end of the project. The success of the workshop can be attributed to the large range of topics presented, the variety of speakers and the organisation of Tom Smolinka and Magnus Thomassen.

Emily Price is a research scientist at Johnson Matthey Technology Centre, Sonning Common, UK. She has a Masters degree in Chemistry from Cardiff University, UK, and joined Johnson Matthey in 2011. She worked for four years in the Fuel Cells Research group on direct ethanol fuel cells, direct methanol fuel cells and PEM water electrolysis. Since April 2016, she has worked in the Emissions Control Research group. Her current area of research is focused on gasoline particulate filters with low platinum group metal content.